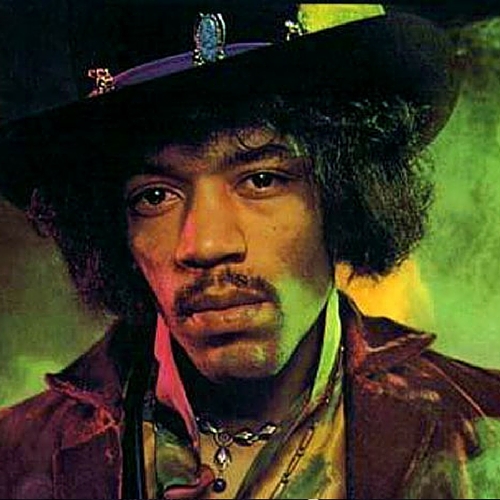 Although Paul McCartney’s impact on music is amazing, Jimi Hendrix made his mark in a far shorter time span. Both of them were born in 1942, and Hendrix died about five months after the Beatles’ breakup.

Hendrix was born into poverty and descended from a rare mix of African American, Irish, and Cherokee; his great, great grandmother was full-blooded Cherokee. In his early life he was surrounded by poverty, domestic violence, and alcohol abuse. Often when his parents were fighting, he would hide in a closet for refuge. The family lived like nomads, migrating from apartments to cheap hotels.

In his pre-teen years, he was seen around school with a broomstick air guitar. His teachers implored his father to buy the boy a guitar, but he flatly refused. Hendrix first instrument was a salvaged ukulele found among some refuse while his father was cleaning out a garage. Hendrix learned to play music by ear, playing single notes on the ukulele along with some Elvis songs. At the age of 15, Hendrix purchased his first guitar. It was an acoustic, and he practiced for several hours every day. He had a passion for the blues. His early influences were Muddy Waters, B.B King, Elvis, Robert Johnson, and Chester Arthur Burnett, a.k.a. “Howlin’ Wolf.”

In 1959, Hendrix joined a band and quickly learned that without amplification, his sound was drowned out by the other members of the band. His father bought him is first electric guitar, a Supro Ozark. It was a right-handed guitar, and Hendrix, being a resourceful Southpaw, re-strung it so it could be played left handed. All of the electric guitars he played throughout his career were right-handed guitars that were converted for his use. During one of his first gigs, he was fired between sets for being too over the top and showing off. He got into trouble with the law in the early sixties and was forced to make a choice between being put in jail and joining the army. His stint in the army did not work out. His passion was for music, and he was released a little more than a year after his enlistment. He was given an honorable discharge based on his unsuitability for service.

Hendrix and an army buddy he had jammed with formed a band called the King Kasuals. Hendrix toured on a southern circuit and acquired gigs playing backup musician for various soul and R&B bands. He quickly grew bored, tired of having to follow the rigid rules put forth by bandleaders. In 1964, Hendrix moved to New York and won first place in an amateur contest, affording him the opportunity to be noticed. He earned an audition with the Isley brothers and accepted an offer to play guitar with their backup band.

Much like a lot of early performers, Hendrix signed a recording contract without understanding all of the fine print. He signed a three year contract with an entrepreneur, and while their relationship didn’t last long, the contract would come back to create legal problems in the years that followed. Hendrix toured with Curtis Knight and the Squires and earned his first composer credits. However, he once again became restless and so moved to New York City, where he formed a band called Jimi James and the Blue Flames in 1966. It was with this band that he developed the performance and guitar styles he would use in the Jimi Hendrix Experience. Through some recommendations from Keith Richards of the Rolling Stones, Hendrix connected with the right people and the Jimi Hendrix Experience became a reality.

In one of their earliest engagements, the Experience’s manager recommended they do something dramatic, far more dramatic than just the smashing of instruments that had become popular. This led to one of the most iconic photos in rock and roll history. It was the image of Jimi setting his guitar on fire after a set. The media labeled him “the Black Elvis.” The Jimi Hendrix Experience had some success with their release of “Hey Joe” and “Purple Haze,” and was starting to build momentum on the album charts before being upstaged by the Beatles’ release of “Sergeant Pepper’s Lonely Hearts Club Band.”

Before disbanding, the Experience was able to record and release three studio albums that are all considered to have profoundly affected and influenced hard rock. The Experience broke up in June of 1969, and Hendrix played the Woodstock Music Festival in August of 1969. By 1969, Hendrix had become the highest paid rock musician that earned him status as the main headliner for the music festival. His performance of the “Star Spangled Banner” is rated by Guitar World as number one on their list of 100 greatest performances in rock history.

Hendrix’s use of effects and feedback left a mark on the world of rock, and his influence is still being felt today. What is truly remarkable is that all he accomplished was done in a nine year period! The number of compilations that exist of his music is quite amazing. He will be forever remembered for his unique style. Jimi Hendrix was a man who changed the face of music and how a guitar is played. Jimi Hendrix: a Southpaw who changed the way the world hears music.