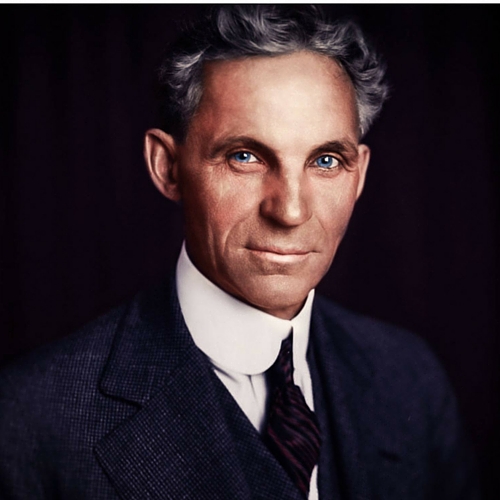 From the humble beginnings of a boy who liked to tinker and take things apart, Ford went on to become a machinist apprentice and later served as Thomas Edison’s chief engineer. He was a man who had a vision for creating an automobile that the common person could afford. In his two years with the Edison Illuminating Company, he made enough money to start his career as an automaker. Ford’s first auto company was a failure. The vehicles were of decent quality, but he could not find a way to make them affordable. In partnership with C. Harold Willis, Ford developed a new vehicle and formed the Ford Motor Company in 1903.

There are some who would say that Ford was not an inventor, but merely a man with good timing and good ideas. Nothing could be further from the truth. Henry Ford was a machinist, an innovator, an inventor, and his drive for success was unstoppable. He is credited with over one hundred and fifty patents, most of which were advances in automotive engineering. In 1932, Ford introduced the world to the V-8 engine. He is also credited for inventing charcoal briquettes in 1920. Moreover, Ford was a pioneer in advertising—saturating his company name in media blitzes throughout the United States. His company sold over fifteen million model T’s. At one point, he controlled over fifty-five percent of the U.S. auto market. Ford’s greatest innovation was the moving assembly line. Mass production allowed him to lower the cost of the Model T. In 1908, the Model T sold for around one thousand dollars. In its twenty-year production run, it sold for as little as three hundred dollars due to his effective use of the assembly line.

Although the assembly line was highly efficient, it was boring work and led to a high turnover of employees and constant retraining. To change the equation, Ford’s outside-of-the-box thinking came up with a solution. He doubled his employee’s wages. The effect was far reaching: higher retention of employees, less retraining, and higher morale. Further, with this increase of wages, his own employees could now afford to buy one of the automobiles they helped to produce. What a true stroke of genius!

Henry Ford’s affordable vehicles changed the face of America. People moved out of big cities, and the national highway system was born. Other auto makers and companies were forced to raise wages. Ford’s moving assembly line and mass production techniques and principles have been applied with great success by many other industries. Ford was not an overnight sensation; it took years for him to realize his dream of making an automobile a blue collar worker could afford. Henry Ford—a Southpaw who embraced his creativity and watched his vision become reality. Creativity and genius exist in the right hemisphere of the brain, and Henry Ford exemplifies what a right-brained, left-handed person can achieve!